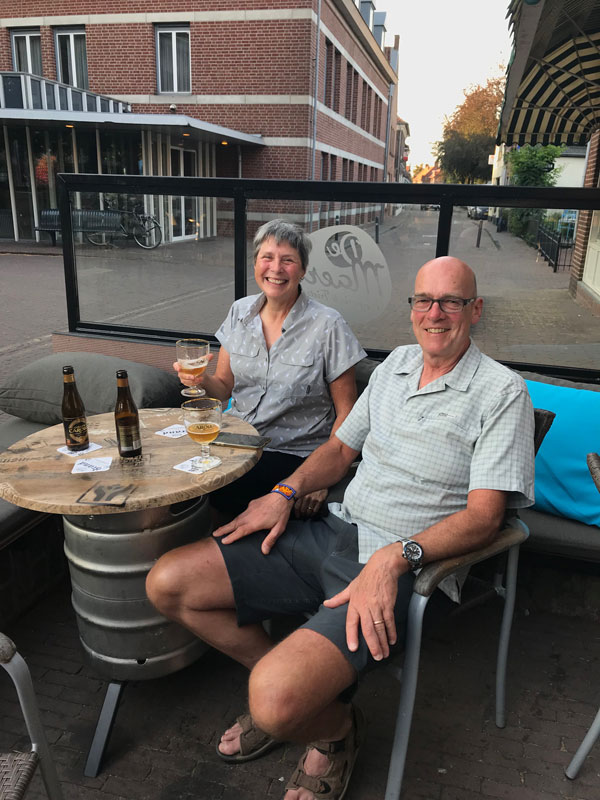 When l last wrote, we were both feeling tired and beat up and were re-evaluating our plan to complete the Ronde van de Nederland.  In the absence of a better idea, we continued on the route, with a commitment to get an earlier start and limit our days to 60 kilometers, all the while discussing our options.  An interesting thing happened: we got past our hump.  We woke up a couple days ago and realized that it no longer felt daunting; we were stronger, our bodies had recovered from the initial exhaustion of daily riding, and we were on track to complete the loop.

Or were we?  Our problem now appears to be accommodations. Not only is it high season for tourists coming to the Netherlands, but it is also vacation time for the Dutch.  This, on top of the many festivals scheduled for the end of July, make for a challenging time finding places to stay.  We’re scheduling further out than we typically do.  It’s taken hours – a real time suck.  So, we will more or less circumnavigate the country, while making changes as needed to ensure that we don’t find ourselves sleeping on a bench.  As I see it, we’re doing the Ronde in spirit!  We now have five of the six photos needed for our ‘certificate’; we anticipate getting the last one in the next couple days.  It’s a silly game.

This route is interesting.  Parts of it are ‘better’ than others – prettier, more appealing, more cultural, but somehow, in total, it paints a picture and fills in the blanks.  The Netherlands is not Amsterdam, or Delft or Gouda.  It’s a country with cute towns and not so cute towns, and lots of agriculture and sheep and cows.  It’s a country of dikes and canals and flowers … and bikes and bikes and bikes.  We haven’t seen any of the tourist attractions this trip, but we’ve seen a lot of the country.

There were times when I wondered why I crossed an ocean to ride in the hot sun through fields of corn and potatoes. But then we find ourselves cycling through a magical forest, or through a bustling market in a little village, or being invited into someone’s garden for coffee and stroopwafels – and I remember why we crossed that ocean.  Jeff never has that question.  It is his dream to live in a place this cycling friendly.

The Dutch cycle everywhere.  Most people ride the standard Dutch city bikes – although increasingly they are configured as e-bikes with a battery and motor.  They ride in shorts, and in fancy clothes, they ride to work, to stores, to anywhere.  They carry packages and people on their bikes.  When an American would get in a car, the Dutch get on a bike – young, old, fat, thin, fit, out of shape, and everything in between – Bicycles are their default mode of transportation.  They are so comfortable on them that at times it seems that the bike is an extension of their bodies.  Only the sport riders with racing bikes wear helmets.  Everyone else goes without, including children.  It is not uncommon to see a parent riding with an infant in a seat right in front of the handlebars … no helmet, of course.  In the U.S., someone would probably call Child Protective Services on that irresponsible parent! They even bring their dogs with them, in baskets and trailers.  It’s really something.

Last night we stayed in a business hotel in Roermond, a city with an old center and a new outlet mall that attracts Asian tourists.  Tonight, we’re in Ospel, a small village with not much character.  The only businesses we’ve seen here are the simple, somewhat tired café/hotel we’re staying in, a small grocery and a butcher.  Tomorrow is Eindhoven, the birthplace of Philips Electronics and now a design and technology hub.  There are a whole lot of pedal strokes between here and there.

9 thoughts on “Change, the Only Constant”

Leave a Reply to I dream of Srini Cancel reply