The route from Cowans Gap was supposed to go under the mountain, through an abandoned PA Turnpike tunnel. Rumor had it that it was dark and creepy, but it beat having to slog it out over the mountain. Despite diligently following the signs to the tunnel, I found myself climbing into the fog. I knew I had missed it, and was climbing over the mountain. It was a hell of a mountain, with fog so thick I couldn’t see 50 yards in front of me. When I finally got to the top, the rains came.

I descended into the town of Breezewood, which is an island of motels and fast food restaurants, clustered around the intersection of multiple highways. This is a town where walking is illegal! I got a motel room and decided to walk to get some dinner. Every intersection had no crossing signs. It was impossible to walk anywhere without breaking the law, and dodging traffic coming from all directions. I was not to be denied. I crossed anyway and ate my dinner.  It’s ironic, given that the town now known as Breezewood used to be a traditional pathway for Native Americans, European settlers and British troops.

It was raining steadily, with temperatures in the 40s, when I left Breezewood. Clearly, I wasn’t going to get off the hook without riding in the rain.   After a long, difficult, wet day, I made camp in Shawnee State Park, where I spent 14 hours in my tent until the rain finally stopped the next morning. I immediately burned all the firewood that I had been hoping to burn the previous night. It was so nice to warm up in the cold, damp, 39-degree air.

I had one more tough day in the mountains before making it to the Great Allegheny Passage (GAP), a rail trail that will take me all the way to Pittsburgh. And a tough — but beautiful — day it was. Extreme gradients were the theme — 10%, 12%, 14% and 17%!  Continuous up and down all day, with a steady headwind.  I got it done and set up camp along the trail.

The GAP trail has been a nice, quiet, flat path along the Casselman and Youghiogheny rivers, and a much-needed break from the steep terrain of the mountains. Side streams abound, with the sound of rushing water everywhere due to the last few days of rain. This area is called the Laurel Highlands. So far, this is a trip of temperature extremes — 90 the first day and 30 this morning. 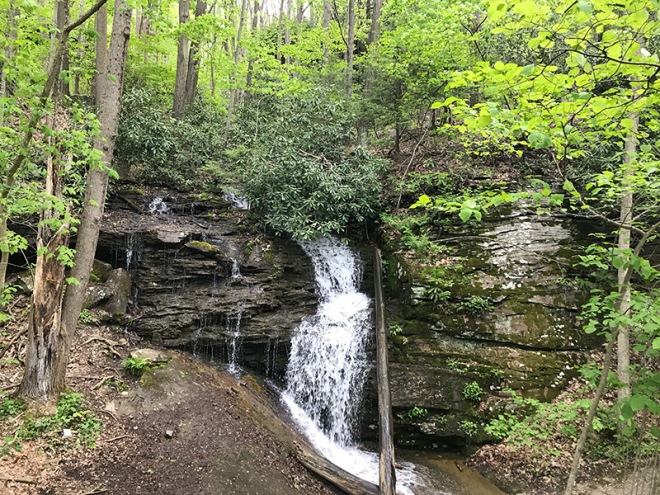 Our beloved cat, Peanut, died on Monday night. I was both sad and relieved. Peanut was 18 years old and in failing health for some time. When I said goodbye to him before leaving for this trip, I had a feeling I might not see him again. As I rode along the trail today, I thought about all the wonderful times we had together. He was a real lover. Peanut will be sorely missed.

10 thoughts on “From the Mountains to the Flatlands”